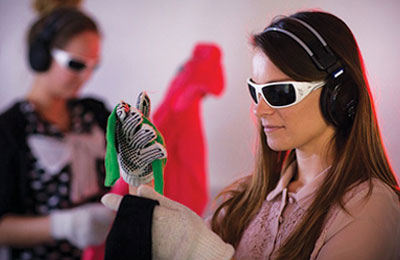 The attached article describes one person’s experience of a Virtual Dementia Tour.  We will be hosting a similar activity in River Falls on the last Tuesday in April as part of our multipart lecture series on dementia, co-sponsored by Pierce and St. Croix Counties and Our House Senior Living.  Watch for more details in the coming weeks.

Loud banging, foot pain, and flashes of light – my eight minutes as a dementia patient

By Tara Bahrampour December 25, 2017
The worst part was the spikes inside my shoes.

Or maybe the worst part was the dimness, my world reduced to shadows.

Or the crackling static and loud banging that crowded out the sounds I really needed to hear, such as the instructions of the woman who had placed me in that darkened room, where I was trying to match socks, though my fingers couldn’t feel.

Why was I there? What was I supposed to do? Whose socks were these?

I knew what was happening in the larger sense: I was at Brightview West End, a senior living facility in Rockville, participating in a training session for caregivers of dementia patients.

The Virtual Dementia Tour, which has trained people at thousands of facilities across the United States, aims to increase empathy for dementia patients by showing them what it feels like to walk in their shoes — their painful, destabilizing shoes.

“Once the headphones are on, you won’t be able to ask any questions,” said

Albina Misini, director of Brightview West End’s dementia care section, as she placed them on my head. Through goggles that rendered everything dark, foggy and yellowed, I could kind of see her mouth move; she was giving me instructions to do something. But thanks to the cacophony of voices, clanking and other sounds, this was what I heard:

“I didn’t hear what you said,” I said, more urgently.
But that was it. I was guided into a darkened room with a dresser, a

nightstand and a double bed covered in a mess of clothes.

The door closed behind me. I edged toward the bed. Each step drove plastic shards into the soles of my feet, so I pitched forward, walking unsteadily, to lessen the pain.

Folding. I could do that. The two pairs of oversize gloves on my hands made me clumsy, but I managed to fold what appeared to be a pillowcase, a shirt, a towel. I felt proud, even cocky. But the socks? I saw only dark shapes, and it was impossible to feel whether the fabrics were thin or thick, stretchy or not. Then, out of nowhere — BAM! — a loud crash made me jump. And every few seconds a flash of white light stabbed the darkness.

I turned to the dresser, where a stack of plastic plates stood beside napkins, cups and some plastic cutlery. It seemed reasonable to lay a place setting. But my mind was spinning. Fork on the right? No, on the left, next to the knife. How long since I’ve set a table? The knife goes with the spoon. Oh, wait, the napkin . . .

But hold on — why was I even setting the table?

I later learned this impulse to arrange and straighten things is common as people with dementia try in vain to master their environments — as were many of the reactions that I and the other trainees had during the tour. Its developer, P.K. Beville, started thinking about how to better serve older patients in the 1980s while working as a psychological evaluator of nursing home patients.

Over 2 million people in 20 countries have taken the Virtual Dementia Tour since 2002, at care facilities, home health-care organizations, state agencies, colleges and universities, Beville said in an interview. About 3,000 have purchased the components so they can give their own tours.

In developing the tour, “I was mainly curious about how the brain dies, and what are the behavioral implications of cell death in the brain,” said Beville, who wrote a PhD dissertation about sensitizing care facility staff to what having dementia is like.

She studied brain imaging of people with dementia and looked at how the affected areas relate to actual behavior to simulate experiences as part of the project.

“After eight minutes during the tour, we began to see some of the behavioral responses that we actually see in a memory care unit,” she said.

The tour creates empathy for the caregiver, and feedback from participants also helps provide insight into why patients with dementia behave in certain ways. “When a person comes through the training and we ask why they did certain things that look bizarre, like a person with dementia, they can answer.”

Trainees wear goggles that imitate the loss of peripheral vision associated with dementia; they also mimic the effects of cataracts, macular degeneration and yellowing that are common as one ages. Gloves make it harder to manipulate tools, push buttons or feel anything, to approximate the reduced sense of touch and depth perception associated with dementia. People with dementia are often unable to block out background noise, so the headphones amplify ambient sounds until they interfere with normal functioning. The spiky shoe inserts mimic peripheral neuropathy, the numbness and pain from nerve damage that often affects hands and feet.

The tour is constantly being updated. Beville is working on adding a temperature component, because people with dementia have trouble interpreting whether their surroundings are hot or cold, and a video that imitates the frightening visions experienced by people with Lewy body dementia.

After my eight minutes in the training room, Misini removed my headphones, and relief washed over me. Afterward, watching trainees go into the room two at a time, I was struck at how much their actions and body language — and no doubt mine as well — resembled that of dementia patients: the unsure shuffle, the dazed expression, the sudden barking out of a disembodied word.

I was also shocked at how many instructions I’d missed. It turned out that I was supposed to have put on a white sweater, written a three-sentence note, set the table for four, folded all of the towels, and filled a cup with water and drunk it.

Before the tour, Hannah Asuakyi, a resident assistant at Brightview, had been telling me about a patient who thought she saw someone in her room, which made her afraid to sleep there. Fifteen minutes later, Asuakyi herself was taking mincing steps down the hall, reaching out for the wall to steady herself.

After being read a different set of instructions from mine, she crept into the room. She peered around the corner at the bed, then backed up to the wall and plastered her body against it.

Without the gear, I noticed things I hadn’t seen the first time. A strobe light

sent intermittent white flashes across the room. A sign on the wall listed some instructions, but they were missing words and printed in varying font sizes.

Asuakyi stayed glued to the wall until Misini led her out and removed her headphones. Then she started laughing. “I didn’t know where I was going! I couldn’t see you. You left me so I didn’t know, and I saw someone on the bed. I was scared.”

Hermine Ngom, a medication technician who had just emerged from the room, looked stricken. “I just — if that’s how they are, I just . . .” She sighed and shook her head. “I was confused and hot and nervous.”

At a debriefing afterward, the trainees learned more about what they’d just experienced. Along with limiting mobility, vision, and hearing, the tour is designed to disorient and confuse. Some people get a hoarding impulse — they might pick up all the plates or towels and walk around with them — a response seen in some dementia patients as they try to control an environment they are increasingly losing control of.

“What we did to you was create short-term memory loss,” said Patrick Doyle, director of dementia care at Brightview, which has trained employees at 34 of its facilities around the United States. “Even if you heard the task, you forgot when you went in . . . A lot of people say, ‘You never read me those instructions.’ ”

“I felt like there was something wrong on top of the bed, so I just fixed it,” said Elisa Portillo, a medication technician.

Doyle nodded. The impulse to fix something that looks disheveled is a common feature of dementia. So is “shadowing” — mimicking the actions of someone else in the room. “So if you see someone else folding laundry, you figure they must know what they’re doing.”

who is alone, after noticing that someone — an observer from Brightview — was sitting in the room while she was there. “I was going, ‘Why is she just standing there; why isn’t she helping me?’ ”

After having been so sure someone was lying on the bed, Asuakyi said she will be more compassionate with patients who think they see intruders. “They see differently. I saw differently. So when they say something like that, I will do it better; I will assure them that they are safe.”

Administrators at facilities where staff members have undergone the training say it has made caregivers more patient. “I’ve seen those CNAs slow their pace down some,” said Linda Blackstock, a registered nurse and weekend supervisor at Four County Health and Rehabilitation, a skilled nursing facility in Richland, Ga. “Where they used to say, ‘Come on, get your shoes and socks on, let’s go.’ Well, the patient has no idea what they said.

“Now, the person leads them to the room, asks them where their socks are, asks where their shoes are . . . because [they know] they didn’t understand more than one instruction at one time.”

Sometimes, it is the long-term caregivers who are affected most by the tour. At Azura, which has 14 care facilities in Wisconsin, a woman who had been doing it for 25 years took the tour and then burst into tears.

“She said, ‘For 25 years I thought I knew, and I realized I didn’t know anything,’ ” said Paula Gibson, a spokeswoman there. “She said, ‘I’m going to appreciate them so much more now.’ ”

Both caregivers and their loved ones with memory loss or physical frailties will benefit greatly from a day away.  See this link for more information.